Editor’s note: The Pro Bono Board, a student group committed to expanding pro bono knowledge and opportunities to students, names a Pro Bono Volunteer of the Month. March’s honoree is Claire Rogerson, ’20. Robert DeNunzio, ’21, a member of the board, wrote this story on her work. 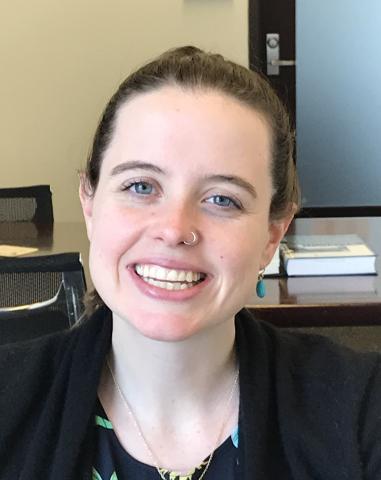 For Pro Bono Volunteer of the Month Claire Rogerson, ’20, the Federal Criminal Justice Clinic’s Bond Project allows her to utilize her legal knowledge to effectuate tangible change. When Rogerson began law school, she knew she was interested in public interest work; the only question was which avenue of work she would pursue. She answered that question during the summer after her first year when Rogerson first worked in the Federal Criminal Justice Clinic, writing sentencing motions in federal cases and helping clients prepare for sentencing hearings.

This year, she has become one of the student leaders in the Bond Project and co-president of Defenders. Led by Professor Alison Siegler, director of the Federal Criminal Justice Clinic, the project seeks to ensure that judges and prosecutors adhere to the requirements of the federal bond statute when determining whether to grant a defendant pretrial release or lock him in jail pending trial. One element of the Bond Project was a 10 week Courtwatching Initiative during which clinic students and volunteers gathered and logged data from actual bond hearings in federal court.

Rogerson was instrumental in running and systematizing the clinic’s Courtwatching Initiative. She helped train and coordinate about 75 volunteers, including undergraduate first-year students and third-year law students. These volunteers visited the federal courthouse in the fall and winter quarters to observe bond hearings and record data on judge and prosecutor practices. Clinic students like Rogerson supervised the volunteers, ensuring that they recorded data accurately.

Rogerson is no stranger to this type of work, having previously trained volunteers during her pre-law school work for campaigns such as on Brad Schneider’s congressional campaign and the Proposition 34 movement to ban the death penalty in California. She said those skills have been even more useful in law school than she expected.

The community of volunteers has been a particular highlight of the Bond Project.

“It has been great to get so many people involved,” Rogerson said. “A lot of people want to help enforce others’ rights and this gave a lot of people an opportunity to get involved in something meaningful.”

Rogerson suggested the presence of volunteers at the courthouse has increased the focus on problems with how the bond statute operates in practice.

In addition to gathering data, Rogerson and other clinic students prepared sample briefs and motions challenging bond practices that violate the statute. While the project is ongoing, some defense attorneys have already filed versions of the sample motions that the clinic prepared, and these defenders have said the clinic has improved their ability to challenge detention practices. Rogerson is looking forward to continuing her work on the project in the spring.

In a resounding recommendation of the Federal Criminal Justice Clinic she added, “Working on this project makes me enjoy law school more. The things that I’m learning are moving toward a goal and that makes the experience even more meaningful.”