Editor’s note: The Pro Bono Board, a student group committed to expanding pro bono knowledge and opportunities to students, names a Pro Bono Volunteer of the Month. December’s honoree is Osama Alkhawaja, ’20. Morgan Gehrls, ’20, a member of the board, wrote this story on his work. For more information on pro bono work, visit the Pro Bono Service Initiative website or contact Nura Maznavi in the Office of Career Services. 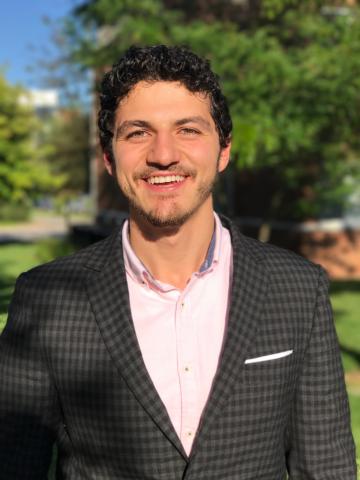 Every day, Pal Legal receives inquiries from frightened pro-Palestine activists, many of them students, whose speech has been threatened or suppressed. Osama Alkhawaja, ’20, now an intern for Pal Legal, knows exactly what it’s like to be one of those students.

Throughout college, Alkhawaja organized with Students for Justice in Palestine (SJP), which he describes as an organization that stands in solidarity with Palestinian people and advocates for the end of the occupation of Palestine by US-backed Israeli forces. When Alkhawaja faced backlash for his activism, Pal Legal was there to help.

“They were the only org that reached out to us, and the only org that supports pro-Palestinian activists full-time,” he said. “They advocated on our behalf and helped make sure we had the freedom to organize.”

Working with Pal Legal as a student activist during college helped Alkhawaja make the decision to come to law school.

“They were always on my radar, and part of my inspiration for going to law school, so I wanted to give back in the same way they helped me,” he said.

Alkhawaja has a broad range of responsibilities as an intern, ranging from legislative work to litigation. His background as an activist informs his approach to each of his assignments. One of his litigation tasks is helping process client intake.

“Every day we get a call or two from a student or professor,” he said. College students usually say they’ve faced sanctions by their university or have been intimidated by outside organizations.

“I was once in the position of the individuals reaching out,” he said. "It’s really helpful to know where these people are coming from. They’re scared—they don’t know where to go.”

Alkhawaja is able to draw on his mutual interest in activism in order to connect with the clients.

“The first thing we do is try to comfort them,” he said. “As lawyers using their education to support movements for social change, it’s important to build interpersonal connections with the activists who call in.”

Pal Legal’s legislative work includes combating legislation that restricts or prohibits the Boycott, Divest, and Sanction (BDS) movement. Anti-BDS legislation exists or is pending in 25 states, and Alkhawaja researches it at all stages of the process. He’s also involved with the litigation challenging these laws. This includes Pal Legal’s support of an ACLU lawsuit to challenge Arizona’s anti-BDS law, which is proceeding at the appellate level. Working on this historic case has been particularly exciting for Alkhawaja.

“This is the first time the anti-BDS laws are being presented before a circuit court,” he said.

Working on the briefing for this case, which Alkhawaja calls his favorite project, has presented a special opportunity to draw on both his experience as an activist and his legal research. Alkhawaja’s work on the briefing includes examining anti-BDS legislation’s chilling effect on speech that advocates for Palestinian liberation.

“Contextualizing the legal issue into the broader movement has been really cool,” he said.

Alkhawaja, who is also involved with the Spring Break of Service, International Refugee Assistance Program, and Federal Criminal Justice Clinic, is committed to a public service career after graduation.

In preparation for a career in public service, his internship has taught Alkhawaja skills for legal advocacy, but moreover, has helped him put his entire career in perspective. In particular, going from activism to legal support has shaped Alkhawaja’s beliefs about how lawyers can and should support social movements.

“Knowing your place, as someone who’s offering support, is important,” he said. “It’s not my job to tell people what to do or how to do it.”

Alkhawaja’s lessons from working at Pal Legal will help him throughout his career as a public interest lawyer, which may include pro-activist impact litigation, immigration work, and public defense.

“I think Pal Legal has taught me a lot about movement lawyering,” he said. “A lot of social change happens outside of courts.  Pal Legal has helped me find the proper role for an attorney.”