At 13 years old, John G. Roberts Jr. knew he wanted to attend an exclusive Catholic boarding school in his home state called La Lumiere, and he produced a neat, handwritten letter to the school’s headmaster as part of his application.

“I realize that going to La Lumiere will mean a lot of study and hard work, but I feel confident that these labors will pay off in large amounts when it comes time to apply for admission to college,” he wrote. “I'm sure that by attending and doing my best at La Lumiere, I will assure myself of a fine future. I won't be content to get a good job by getting a good education. I want to get the best job by getting the best education.”

Roberts, of course, eventually became the chief justice of the United States. The letter, which is pictured at the beginning of a recent biography of Roberts by CNN legal analyst Joan Biskupic, offers early evidence of Roberts’ ambition and clear life plan.

“Out of all the very smart people sitting in this room, going to law school, bound for clerkships of various sorts, bound for important government jobs, bound for great scholarship—who emerges … to become a justice?” Biskupic asked students last month during a Q&A-style Schwartz Lecture with Geoffrey R. Stone, the Edward H. Levi Distinguished Service Professor of Law.

Biskupic, who has covered the Supreme Court for 30 years and has written biographies of justices Sandra Day O’Connor, Antonin Scalia, and Sonia Sotomayor, offered students an insider’s perspective on the paths and tenures of various justices, including Roberts, the focus of her new book, The Chief: The Life and Turbulent Times of Chief Justice John Roberts. 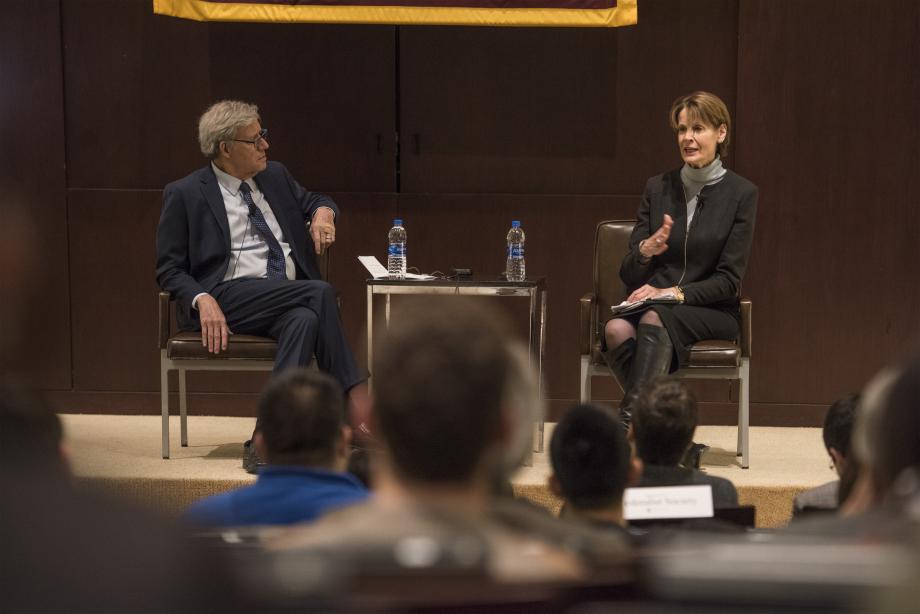 Roberts, who was ultimately accepted at La Lumiere in northern Indiana, is the youngest chief justice on the Court in 200 years. Originally, he was nominated to fill the vacancy left by O’Connor when she retired as an associate justice. But Chief Justice William Rehnquist passed away while the nomination was pending, and President George W. Bush decided to nominate Roberts for chief justice instead. Unlike Roberts, Rehnquist had served on the Court as an associate justice for 14 years before becoming chief. Starting his tenure on the Court in this leadership position was particularly challenging, Biskupic said.

“The last managerial job he essentially had had been at the [Harvard Law Review],” she said. “And here he is with eight people who are appointed for life, who are certain they're the smartest persons in the room. They've been together for 11 years. There hadn't been a change in the Supreme Court since Breyer had come on in ’94, so that was tough—he had to figure out how to navigate among a lot of personalities.”

Making decisions as chief justice, Biskupic said, Roberts tends to see cases not as isolated disputes, but as parts of a broader legal and political landscape.

“He’s always […] stepping back and thinking, ‘What else is happening? What are people seeing?’” Biskupic said. “He’s very aware of how things might be received. So not only is he looking at the facts of the case, the law of the case, but the moment we’re in, in terms of the law and politics.”

When Justice Anthony Kennedy retired in 2018, the Court’s ideology shifted, putting Roberts closer to the center. The shift raised the authority of Roberts’ vote, Biskupic said, and encouraged him to further consider public perception of the institution as well as his legacy.

“I knew he would be inclined to want to support the [Trump] administration,” Biskupic said. “But I was also aware that he's got abortion [rights] on the table there. He's got the Title VII gay rights cases there. He'll be presiding, presumably, over an impeachment trial. He's got a lot of other things going on. Could he possibly be looking for an off-ramp to not give Trump too many 5-4 wins?”

If Roberts is called upon to preside over an impeachment trial, she added, he will be careful to keep his role as neutral as possible.

“I’ve gone back and looked at a lot of the transcripts and tried to figure out, what kind of role would this current chief want?” Biskupic said, referring to looking back at the 1999 Clinton trial when Chief Justice William Rehnquist presided. “And this current chief does not want to decide whether the president gets convicted or not. I can guarantee you that. So he doesn't want to have to cast any deciding vote.”

Biskupic also provided a unique perspective on the other justices she has profiled. Scalia took some indirect convincing before he would sit down for interviews, she said. O’Connor did a great deal of maneuvering and persuading her fellow justices behind the scenes. And Sotomayor was a force in her own journey to get nominated to the Court, with a judicial approach that differed from those of the other justices.

“Justice Sotomayor sees herself often as one justice working on her own idea of what the law should be, what her mission should be,” she said. “Whereas Justice [Elena] Kagan is very aware of herself as one of nine negotiating with the nine, trying to broker compromises, trying to find the middle ground.”

Throughout the lecture, Biskupic noted some of the difficulties she encountered writing biographies of living justices—the struggle to get statements on the record, the demands of keeping up with the news cycle—and when Stone opened up the floor for questions, one student asked why Biskupic chose these subjects, rather than people who have died, for her books.