Professor Stone is the author of many books on constitutional law, including National Security, Leaks and Freedom of the Press (2021); Democracy and Equality: The Enduring Constitutional Vision of the Warren Court (2019); The Free Speech Century (2018); Sex and the Constitution: Sex, Religion and Law from America’s Origins to the Twenty-First Century (2017); Speaking Out: Reflections of Law, Liberty and Justice (2010, 2016, 2018); The NSA Report (2014); Top Secret: When Our Government Keeps Us in the Dark (2007), War and Liberty: An American Dilemma (2007), Perilous Times: Free Speech in Wartime (2004), and Eternally Vigilant: Free Speech in the Modern Era (Chicago 2002). He is also an editor of two leading casebooks, Constitutional Law (8th ed. 2018) and The First Amendment (6th ed. 2020). Professor Stone is an editor of the Supreme Court Review and chief editor of a twenty-five-volume series, of books on constitutional law, titled Inalienable Rights, which is being published by the Oxford University Press. 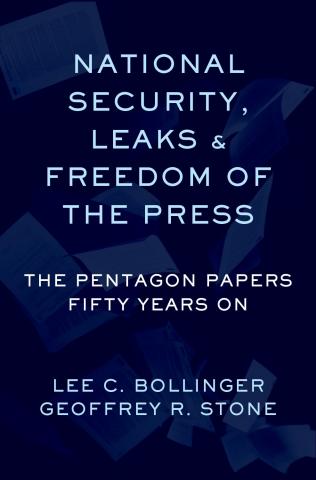 The world has changed i

The University of Chicago Law School

University of Pennsylvania Wharton School of Finance and Commerce

The University of Chicago