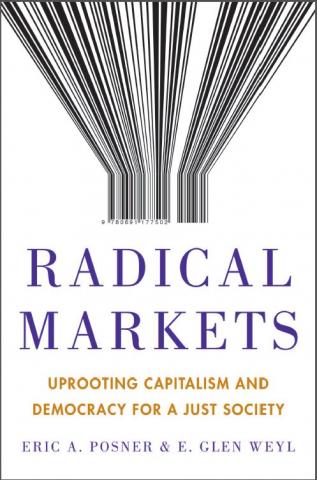 Picture a society in which property is put to its most productive and valuable use rather than being held indefinitely by its richest citizens, and voters are able to cast ballots that reflect not only their interests but the intensity of those interests. In this world, ordinary people might be able to sponsor guest workers from other countries, creating income for both, or take part in a new digital economy that allows individuals to earn money for sharing the personal data that, right now, millions give up for free.

In this future, free competition would reign, all in the name of reducing income inequality, economic stagnation, and political instability.

This is the vision Law School Professor Eric Posner and economist E. Glen Weyl pitch in a new book that examines how a truly free market, one unencumbered by concentrated power and wealth, could reinvigorate our democracy. Radical Markets: Uprooting Capitalism and Democracy for a Just Society (Princeton University Press) puts forth five bold proposals for reforming market systems—property, voting, migrant labor, investment capital, and personal data—and pushes readers to reconsider the role that economics can play in social reform.

“The country is facing a serious problem because our existing economic institutions are failing us,” said Posner, the Kirkland and Ellis Distinguished Service Professor of Law. “The book explains our specific proposals, but our larger point is that people should start thinking in a more radical way about our institutions and whether they’re working properly. And when I say radical, I mean it in the core sense of the word: we have to go to the roots of things and understand how they really work.”

The ideas—which are designed to stand alone or, better yet, work together—are serious proposals grounded in economic theory. But they’re also daring in a way that recalls the discipline’s early days as an ambitious instrument of social change, from Adam Smith in the late 18th century to economists like Henry George, whose work in the late 19th century helped shape the Progressive movement.

“People like Adam Smith were actually radical—they were highly critical of existing economic institutions, often because they seemed to promote monopoly,” Posner said. George, he and Weyl wrote, was deeply concerned about inequality and worried that private property could inhibit a free market.

Posner and Weyl are affirmatively pro-market, but concerned about capitalism’s tendency toward monopoly. They worry about institutional investors who dampen competition by diversifying their holdings within industries—for instance, by buying stakes in every airline and creating incentives for profit-boosting fare hikes. They think that the passive collection of “free” data by giants like Facebook and Google robs society of a labor market that would encourage competition, lead to a more efficient digital economy, and create new jobs at a time when data-powered artificial intelligence is displacing others.

Among their proposals is one that would rethink the private ownership of property, instead creating a system of partial collective ownership in which people self-declare the taxable value of their land, homes, and belongings—but agree to sell to anyone who offers that price. Under the “common ownership self-assessed tax” (COST), people could choose to keep their stuff nearly out of reach, but they’d compensate society for reducing access.

Posner and Weyl also pitch the creation of data labor unions; they argue that people should be paid for sharing the personal data that collectively powers the digital economy. They bring immigration and labor together, too, with their vision for the Visas between Individuals Program (VIP), which would allow ordinary people to sponsor migrant workers, expanding the labor market across borders and reducing the need to view immigrants as job competitors. Both ideas are aimed at reducing under-employment.

The authors also call for new rules for giant institutional investors like Vanguard, Fidelity, and BlackRock, banning them from diversifying their holdings within industries. And with quadratic voting (QV), Posner and Weyl rethink political markets, advocating a system that allows people to vote in proportion to the strength of their interests and values. With QV, each person would be given an equal number of “voice credits” to spend on votes, allowing people to save up for the issues about which they are most knowledgeable or care most deeply. The system uses quadratic math: one vote costs one credit—but two votes cost four credits, three cost nine, four cost 16, and so on. The system would encourage candidates to choose positions that maximize the well-being of their constituents, empower people by allowing them to better calibrate their influence, and make it costlier to express extreme views.

Posner and Weyl know that aspects of their proposals sound fantastical and are likely to encounter resistance, especially among those who feel reasonably content with the status quo. “Any agenda that aspires to such sweeping changes,” they wrote, “faces enormous barriers to its adoption.”

That’s why the ideas would need small-scale testing and careful rollout. They might require new laws or rules to prevent people from leveraging them for selfish gains or experiencing disproportionate loss— protections for migrant workers who participate in the VIP, for instance, or exceptions for family heirlooms under the COST proposal.

“We’re not anarchists or libertarians, and we’re not anti-government—there would be a lot of room for regulation and criminal law,” Posner said. “All of our proposals could be gamed potentially, and that’s why we approach our reforms in a cautious spirit. We believe that reforms should begin experimentally, in a narrow area, to see how they work. And then, if they work well, you expand them. We’re radicals, not revolutionaries.”

Many of the proposals have less radical applications that could serve as first—or even final—steps. Quadratic voting could be used in public opinion polling, shareholder voting, or when condo owners have to make collective decisions about roof repairs. COST—which Posner acknowledges is “probably the most radical and alarming” to people—could be applied to property that is less likely to inspire deep personal attachment: grazing rights, the broadcast spectrum, and public land.

In some cases, first steps, or elements of them, already exist. The Visas between Individuals Program, for instance, has much in common with the system through which relatively affluent Americans hire au pairs from other countries. In Europe, activists are already forming data labor unions, and competition authorities are already considering limitations on institutional investors.

At a minimum, Posner hopes to get people thinking in new ways, much the way reformers have in earlier decades.

“Any new and radical proposal will be greeted by skepticism, even scorn,” he and Weyl wrote. “Yet all the institutions that we take for granted today—the free market, democracy, the rule of law—were at one time radical proposals. At a time of ‘stagnequality’—vicious inequality, economic stagnation, and political turbulence—there is nothing safe about well-worn ideas, and the greatest risk is stasis. If we aspire to prosperity and progress, we must be willing to question old truths, get to the root of the matter, and experiment with new ideas.”