Martha C. Nussbaum and Saul Levmore agree: people should talk more openly about growing old, and they should do a better job of planning ahead.

For the longtime University of Chicago Law School colleagues, whose divergent perspectives have fueled years of enthusiastic intellectual sparring, this accord offers the framework for a new book on aging in which their disagreements underscore a broader message about unchallenged stereotypes and one-dimensional narratives. After all, the lawyer-economist Levmore and philosopher Nussbaum see the world in very different ways—which is essential to this conversation, they note, because people grow old (and respond to growing old) in very different ways, too. It’s harder to make informed choices if one doesn’t have a chance to see varied paths, confront assumptions, or consider individual circumstances as part of a bigger picture. 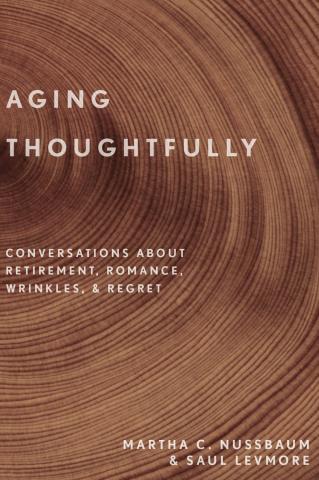 “The trouble with stories of aging, so far, is that there are too few of them to show us the extent of variety within aging, thus too few to make us as suspicious as we should be of partial truths,” Nussbaum writes in the first chapter of Aging Thoughtfully: Conversations about Retirement, Romance, Wrinkles, & Regret (Oxford University Press). “[Aging] is the subject of widespread, indeed virtually universal, social stigma. The social story about aging is laden with stereotypes, most of which denigrate aging people by imputing ugliness, incompetence, and uselessness. These stereotypes invade aging people themselves, skewing self-perception and self-evaluation.”

The book—which is divided into eight themes, each with a pair of dueling essays—is modeled on Cicero’s On Aging, a 2,062-year-old work presented as a conversation between Cicero and his friend Atticus. In Aging Thoughtfully, Levmore, the William B. Graham Distinguished Service Professor of Law, and Nussbaum, the Ernst Freund Distinguished Service Professor of Law and Ethics, engage in their own give-and-take, bringing their distinctive personalities and viewpoints to bear on such topics as retirement policy, inheritance decisions, cosmetic surgery, post-middle-age romance, planned communities, charitable giving, friendship, and inequality. In some cases, they move in the same direction: neither is particularly bothered by plastic surgery, and neither rejects the concept of age-gap couples, though Nussbaum raises concerns about one-dimensional literary and cinematic depictions of aging women as sexless and unattractive. Levmore, meanwhile, explores the role of economic dependence in gap-coupling and wonders whether a continued move toward gender equality will lead to a growing comfort with gap couples in which the woman is older.

On other subjects, their disciplinary approaches lead them toward different conclusions. Levmore, for instance, sees value in allowing employers and employees to voluntarily contract on a set retirement age—a practice mostly barred in the United States by antidiscrimination laws—while Nussbaum worries that compulsory retirement, whether negotiated or required by law, stigmatizes aging and perpetuates inequality. She is particularly concerned about mandatory retirement policies in other countries, calling them the “leading form of age discrimination” and “one of the great moral evils of our time.” She has seen the impact on peers in other countries, who often lose their connection to the academic community when they reach the mandatory retirement age.

“In Finland, (retired scholars) are made to feel they better get out of there and be invisible, even if they were very prominent only one month before,” she said.

Levmore took a different tack: contractually forced retirement could conceivably reduce stigma, he argued. Everyone will have agreed to it, and they’ll know they agreed to it.

“It might be much easier than judgments and hearings [for ineffective senior workers],” he said. “I regard those as demeaning, where you vote to throw someone out.”

Their debate, he said, is a good example of how their approaches differ—and how the complement can deepen discussion.

“I think the philosopher’s way of looking at it is: Do what’s fair, let people be who they are, some people are beginning to thrive at age 80 and, of course, we should make room for that. It’s very open-minded,” Levmore said. “I think the law-and-economics view is much more: How did we get to where we are? Why are the rules the way they are? What were the problems people had? And who’s going to fund the change anyway? Seeing the two [perspectives] together is very healthy for readers. You have some aspirations of the world—and then you have someone else telling you, ‘Don’t think the world is crazy just by magic. You (need to) think about how it got there, and then think about whether you’re sure you can improve it and, if so, how.’”

Planned retirement communities also provoke a bit of jousting in the book: Nussbaum isn’t a fan because she thinks they inspire “presentist” self-indulgence that blocks introspection—“What disturbs me is the way people become totally fixed on momentary pleasure and become indifferent to what’s happening in the larger society,” she said—while Levmore sees such communities as an earned reward.

“This is something that’s happening in the market—maybe we should try to understand why people choose to live there,” he said. “They’ve worked very hard in their lives, and this is the way they want to retire. We shouldn’t be so judgmental about what they want to do. Retirement to some people might not be what we think we want in retirement, but it can be instructive in order to understand how the world works, and why they’re there.”

In one chapter, the authors address tough societal issues of inequality and poverty, with Levmore proposing a forced-savings program tied to Social Security, and Nussbaum exploring how her Capabilities Approach could be applied to help ensure a basic set of opportunities for the aging—a project that would require policymakers to look past stereotypes and account for variation. In other chapters, they take on issues of personal and family finance—including decisions about inheritance and philanthropy—and make the case for advance discussion as a way of avoiding emotionally charged bias.

“People are generally not good at planning very far ahead—they think about aging when they’re already pretty old, and when they’re already pretty old they know their position in a lot of these disputes and aren’t as good at thinking about them,” Levmore said. “They know whether they’ve saved money or not saved money; whether they’re healthy or not healthy; whether they have happy children or not happy children and so forth. What we’re trying to encourage is: before you’re ready to give away money to your kids, think about how you’ll want to do it. Think about what you want before you know your position.”

Discussing these issues, both pointed out, doesn’t have to feel either taboo or painful—even if contemporary culture suggests otherwise.

“Everyone is afraid of death, and they don’t want to think about the big scary thing,” Nussbaum said. “But aging isn’t just about pain and death, which is how a lot of books have treated the subject of aging. Thinking about this long period of active living can actually be challenging and fun and can include friendship and love and work and all kinds of things.”

It can also pave the way for greater reflection on life, society, and family, Nussbaum and Levmore said.

“Imagine the world being different, and then talk to people about it,” Levmore said. “Is there anything wrong with marrying somebody 30 years older than you? I think people gossip about these topics, but they don’t really talk about them. They don’t think about it with their children. And that’s really unhealthy. We’re trying to break that trend by talking about these things.”