Martha C. Nussbaum received her BA from NYU and her MA and PhD from Harvard. She has taught at Harvard University, Brown University, and Oxford University. From 1986 to 1993, while teaching at Brown, Nussbaum was a research advisor at the World Institute for Development Economics Research, Helsinki, a part of the United Nations University. She has chaired the American Philosophical Association’s Committee on International Cooperation, the Committee on the Status of Women, and the Committee for Public Philosophy. From 1999 to 2000, she was one of the three Presidents of the Association, delivering the Presidential Address in the Central Division.

Nussbaum is the Ernst Freund Distinguished Service Professor of Law and Ethics, appointed in the Law School and Philosophy Department. She is an Associate in the Classics Department, the Divinity School, and the Political Science Department, a Member of the Committee on Southern Asian Studies, and a Board Member of the Human Rights Program.

Her books include Aristotle's De Motu Animalium (1978); The Fragility of Goodness: Luck and Ethics in Greek Tragedy and Philosophy (1986, updated edition 2000); Love's Knowledge (1990); The Therapy of Desire (1994, updated edition 2009); Poetic Justice (1996); For Love of Country (1996); Cultivating Humanity: A Classical Defense of Reform in Liberal Education (1997); Sex and Social Justice (1998); Women and Human Development (2000); Upheavals of Thought: The Intelligence of Emotions (2001); Hiding From Humanity: Disgust, Shame, and the Law (2004); Frontiers of Justice: Disability, Nationality, Species Membership (2006); The Clash Within: Democracy, Religious Violence, and India’s Future (2007); Liberty of Conscience: In Defense of America’s Tradition of Religious Equality (2008); From Disgust to Humanity: Sexual Orientation and Constitutional Law (2010); Not For Profit: Why Democracy Needs the Humanities (2010); Creating Capabilities: The Human Development Approach (2011); The New Religious Intolerance: Overcoming the Politics of Fear in an Anxious Age (2012); Philosophical Interventions: Book Reviews 1985-2011 (2012); Political Emotions: Why Love Matters for Justice (2013); Anger and Forgiveness: Resentment, Generosity, Justice (2016); Aging Thoughtfully: Conversations about Retirement, Romance, Wrinkles, and Regret (co-authored with Saul Levmore, 2017); The Monarchy of Fear: A Philosopher Looks at Our Political Crisis (2018); and The Cosmopolitan Tradition: A Noble but Flawed Ideal (2019); and Citadels of Pride: Sexual Abuse, Accountability, and Reconciliation (2021). Her new book, Justice for Animals: Our Collective Responsibility, will appear in December 2022, and she is currently working on a book about Benjamin Britten’s War Requiem. She has also edited twenty-one books and published over 500 articles. 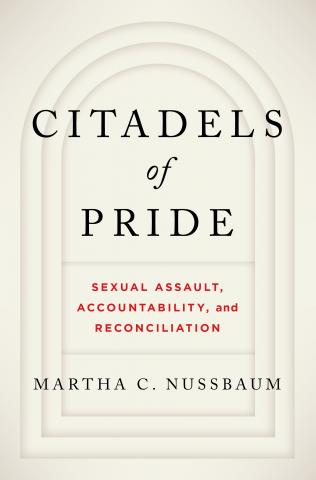 Professor Nussbaum's CV is available from her upon request.