Our Elements of the Law class had just ended, and I was chatting with a classmate as our class flooded downstairs to pick up their Crim casebooks from their lockers.

My classmate clarified: “Are you a textualist or a purposivist?” 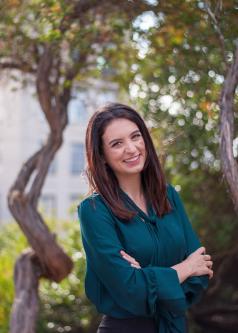 As I stared back, silently confused, my friend proceeded to explain their newly discovered legal interpretive identity. Others around chimed in.

I didn’t say anything. I had just learned these concepts—interpreting a legal text in light of its purpose (purposivism) versus the plain meaning of its words (textualism). It had not yet crossed my mind that we must choose one and subscribe to it.

I felt dramatically unqualified to make this determination so early on. My thoughts on the law evolved daily. Between readings and class discussions, an archetype of the law was emerging in my head: it was clumsy and imperfect, and not nearly as fair and just as I’d hoped. For me, learning about our gloriously grotesque system was simultaneously disappointing, frustrating, and exciting.

The next day, our Elements professor warned the class that legal interpretive methods do not neatly map onto politics. Purposivists were not necessarily liberal, and textualists were not necessarily conservative. I hadn’t even made that connection in my initial reading, but others had—and now I was wondering, too.  As a flurry of eyerolls and quiet sighs flitted around the classroom, it became clear to me that we all collectively neither believed him nor intended to listen. We were all eager to simplify.

In the ensuing weeks, I began to hear peers in post-class Green Lounge debriefs starting to distill conversations to: “Well, it’s so typical of a [textualist or purposivist] to think that.” I realized there was a stark inconsistency developing between our classroom culture and our hallway culture. In the classroom, we continuously emphasized nuance, yet outside the classroom we were quick to make sweeping judgments.

These judgments extended far beyond political affiliation. We would use anything to categorize each other: hometown, education, orientation, religion, appearance, organization affiliation, cold calls, or even what lunch talk someone saw a person attend.

It was as if we wanted to turn each other into caricatures to make our affiliations easy to spot. In our increasingly complicated worlds, how else would we know who was on our team? Despite my disdain for dogmatic categorization, I found myself participating. I would allow hearsay or affiliation shape my views on others without any real substantive experience with that person. My peers did the same to me.

I was still reflecting on this “caricature culture” when the world ground to a halt in the spring of 2020, and I found myself, unexpectedly, in my childhood home. One day, on a break from doomsday scrolling, I went through the closet where I’d left various materials from high school, college, and my first post-graduate job.  These pieces of my old life reminded me of who I had been before law school: the photography teacher who used art as an empowerment tool for at-risk youth; the undergraduate who wrote her thesis on using leadership fundamentals to drive innovation; and the new product development manufacturing program manager who advocated for more women in technical roles in the Bay Area. As I reread through these materials and more, I felt a weighted disappointment in myself.

Throughout my leadership experience, I had always prioritized the idea of identity capital—the concept that we are a repertoire of our collective experiences over time. As a leader, I feel we have an affirmative duty to diversify experiences, since identity capital ultimately molds how we perceive, interpret, and impact our communities. It is because of these layers of experiences and identities that a person is much more akin to a Georges Seurat painting. From a 100-yard perspective, the pointillist painting looks coherent, but a closer evaluation reveals how intricately all those singular dots come together.

We are the antithesis of caricatures.

My own behavior made me complicit in the very thing I criticized about caricature culture. I accepted the premise that we must choose, we must bucket. In these actions or inaction, I did a disservice to the ideals I sought to embody.

I contribute to caricature culture every time I make overarching generalizations about others even if I vehemently disagree or agree with a position; every time I participate in, or permit others to participate in, ad hominem reasoning; and every time I allow one data point to paint a full picture of who that person is.

"Seeing and accepting the fullness and nuance in one another is how we build bridges."

The aggregate costs of this disservice outweigh any short-term benefit of simplification or branded acceptance. To my surprise, in talking with peers, almost every person detailed their own stories of how caricature culture adversely impacted them in one way or another.

Our interactions (or non-interactions) with one another will impact the future of our legal system. In law school, we are bombarded by an emphasis on the leaders we will become after graduating. Yet, it might be even more vital to consider the leaders we are today.

With graduation close in sight, this is one of my greatest hopes for myself: that I resist seeing caricatures—and instead focus on the many, sometimes messy, points that come together within each person and community.

This is not to excise my passions or opinions—in fact, I intend the exact opposite. To effectuate systematic change, it is critical to lean in, but to build bridges while doing so. Seeing and accepting the fullness and nuance in one another is how we build bridges. Bridges to appreciate the inherent benefits of tension in discourse. Bridges to educate. Bridges for self-growth. Bridges to include those left out. Bridges that allow us to evolve as people. Bridges that ultimately will allow for us individually and collectively to create an equitable, inclusive, and nuanced society that transcends our most optimistic expectations.