I came to law school to become a criminal defense attorney. I was adamant about my goal and not selling out.

“Remember King, Malcolm, Wells, Parks, Woodson, Du Bois, and Washington,” my family tells me over and over. “They put our community before any dollar.” 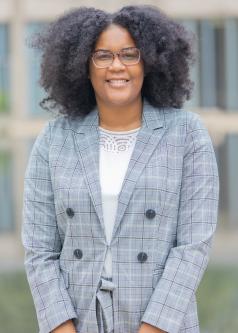 Hence, I did not come to law school to make a six-figure salary, even though the money could have solved a number of problems. To my family, success is more than money. We define success by advancing and overcoming obstacles.

But our obstacles are big ones, the kind that make other people uncomfortable.

Obstacle number 1: Free my little brother. In November 2018, my brother was arrested at the age of 16 for two robberies in the first degree. His bail, which we were unable to post, was set at $25,000 with special conditions, and he remained in the county jail for 17 months. When COVID-19 began to spread, the state of Missouri freed individuals in pretrial detention, and my baby brother was one of them. Unfortunately, he was arrested six weeks later for another robbery in the first degree. Once again, we didn’t have the money or attorneys to help him. And I refused to ask the attorneys I met at speaking engagements for help. I feared that they would view my plea as “dirty work.” I know my brother—the boy who would run to open up the door for strangers, help with carrying groceries, and visit anyone who was sick—and I know the challenges that led him here. Others do not. Will an attorney from a different lifestyle, community, and demographic background care about my baby brother and other young men like him as much as I do? Can my brother wait for me to finally finish law school?

Obstacle 2: Expunge my father’s criminal record. In 1999, my father was arrested and charged with a Class B felony possession with intent to distribute a controlled substance and a Class D felony failure to appear in court. He was facing 35 years but was sentenced to eight years on the first charge and two years on the second charge, though the sentences ran concurrently. Because of my father’s criminal record, he has a difficult time finding employment. Because finding employment is hard, my father also has trouble paying child support. Failure to pay child support is a crime in Missouri. Hence, my father has been arrested over and over. I want my father, and others like him, to successfully reenter and stay in their desired communities. I want to help the man I know as a leader, a spokesperson for the underprivileged, and a community activist for clean neighborhoods and offender reentry programs. The good news is the filing fees for expungement in Missouri are $50 less than my Constitutional Law III casebook.

Obstacle 3: Maintain housing security. The year I started law school—in Arizona before transferring to the University of Chicago—I decided to go couch surfing. I thought being homeless would make me happier than being in debt. Poverty I can handle, but debt? Unfortunately, the property manager of my relative’s home saw me sneaking out at 5 a.m. to throw away the trash. I had to find a new couch or risk causing someone else to become homeless. I lived in five homes in three different states within 10 weeks. Or at least I think that was the number—after a while, I stopped counting. My plan came to a screeching halt when classes resumed in person. Now, I am in debt. I am thankful, however, for my cozy apartment in Chicago and the Law School’s Office of Financial Aid for making me aware of other financial resources.

"I have learned a lot in law school, but I haven’t forgotten myself or my community."

To advance and overcome these obstacles—and to help the people I love and break the cycle of poverty—I must challenge the criminal justice system. I must have a voice in the courtroom. I must protest for equal rights. I must speak out against discriminatory practices.

I must be a lawyer.

But I am afraid, still, of somehow selling out, being taken away from the Black community, and spending my time on people who do not need my help as much as my brother and my father. I am afraid that I will follow a path that leads me away from my roots. To be honest, I didn’t even consider applying to big law firms because I worried that the underprivileged child of a felon might not fit in.

For me, being in law school has meant fighting many silent battles. I live in two worlds and face hardships head-on to make someone’s life better. Embracing the things that make it harder for me to go through life is a heavy burden. But that is who I am. I must accept my situation to reshape what happens next. So, I am taking criminal law classes, joining organizations that focus on the impoverished, and offering free legal services through church and pro bono organizations to make a difference. Moreover, I am mentoring and encouraging people who share a similar story. I have learned a lot in law school, but I haven’t forgotten myself or my community.

For me, success is never forgetting who I am and why I’m here.

“I have learned that success is to be measured not so much by the position that one has reached in life as by the obstacles which he has overcome while trying to succeed.” — Booker T. Washington, Up From Slavery: An Autobiography

The Fig Tree
By Kailin Liu, ’21
The Chameleon
By Marisa Ball ’22
A Trail of Breadcrumbs
By E.J. Morera, ’22
Confronting Caricature Culture
By Nicole Briones, ’22