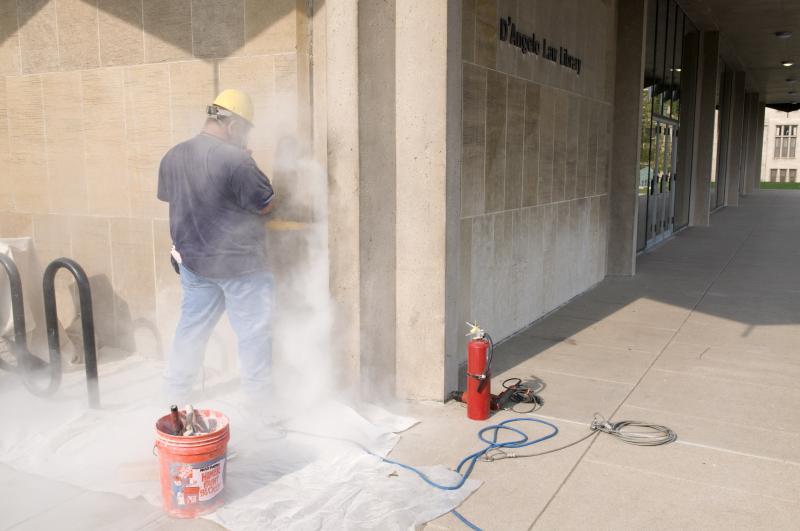 In May of 1958, the cornerstone for the Law School's current building was laid. Slightly more than 50 years later, we opened it up to see what the 1958 crew had left for us to find. 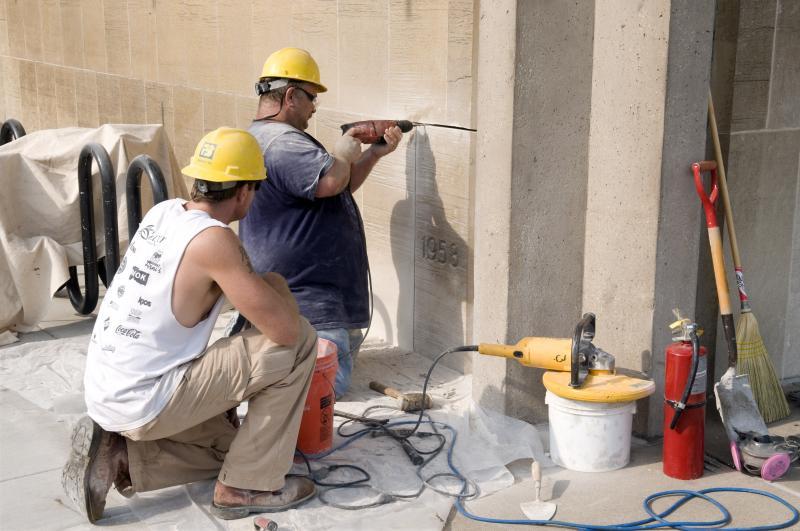 Opening the cornerstone proved difficult - the masons used every tool in their arsenal and still had problems reaching the treasure inside. 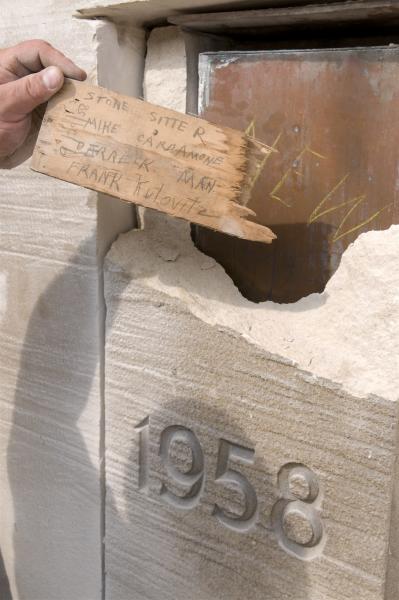 Unfortunately, the top of the stone broke in the process of attempting to remove it, but this did, at least, allow us access to the contents. Several items, including coins and notes, were found inside with the two main boxes. 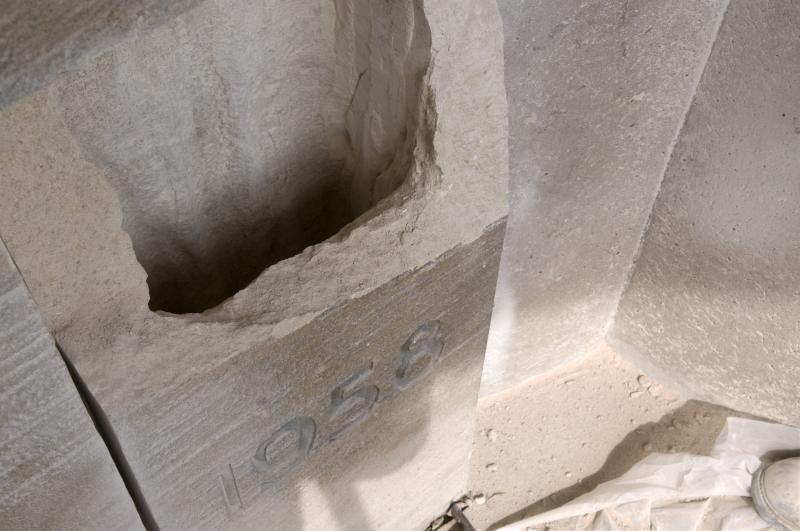 The boxes were wedged in rather tightly, and we will have to consider this when we re-bury materials in the cornerstone this year. 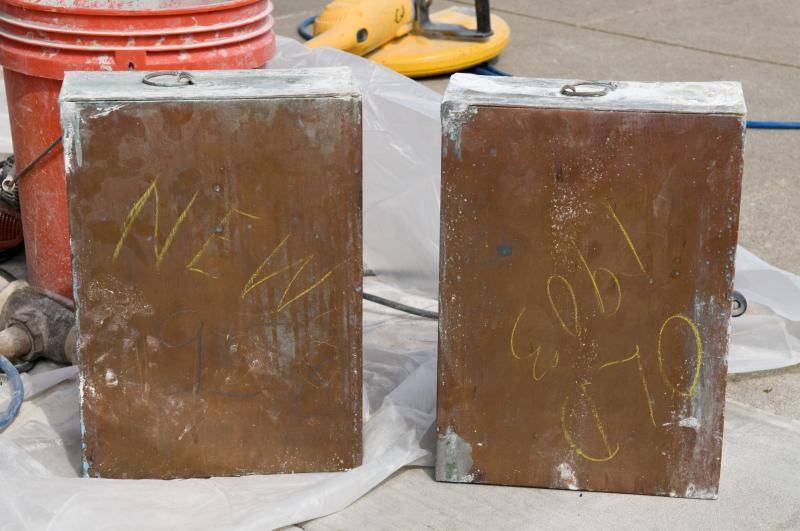 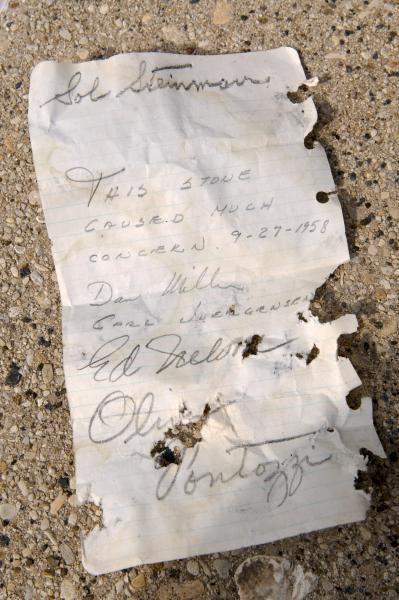 Apparently, we're not the only ones who had issues with this stone! This note was found in the bottom of the cornerstone, together with five coins (a buffalo head nickel, three wheat pennies, and a Guatemalan centavo), and two listings of men who worked on the project. 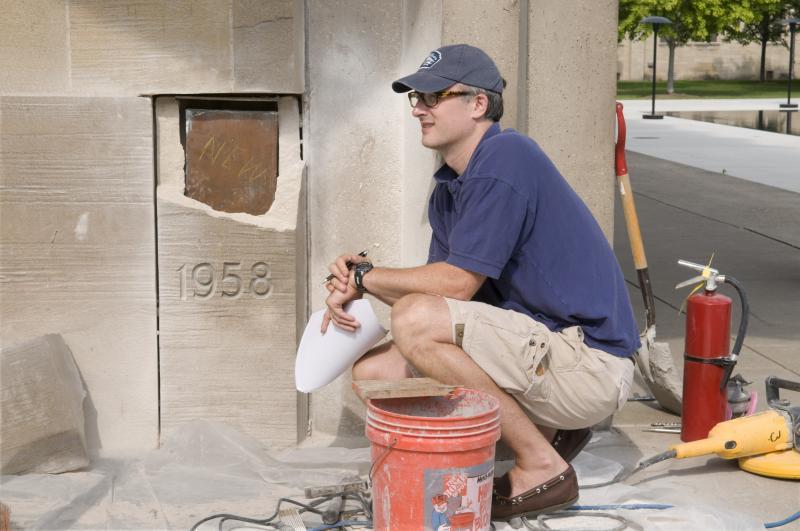 Professor Todd Henderson was one of the many members of the Law School community who stopped by to witness the opening of the cornerstone. 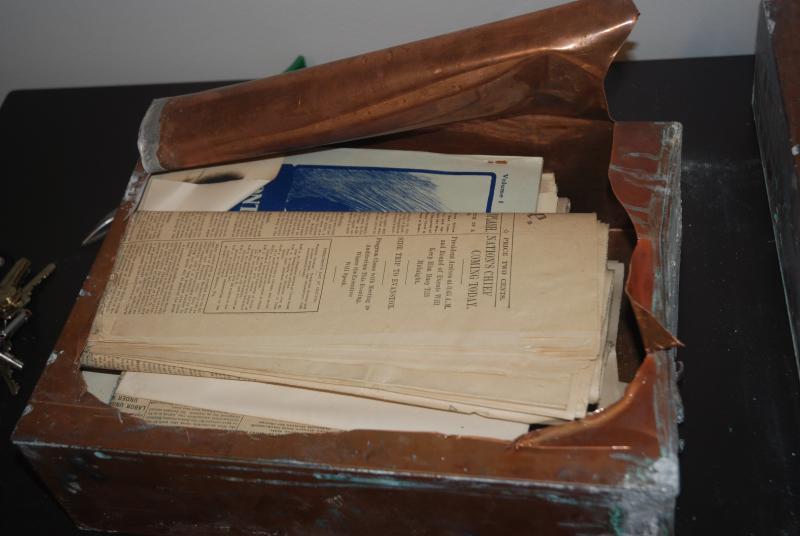 The boxes were made of copper sheeting and soldered shut against five decades of moisture. A pair of tin snips proved the best way to get in to see the contents. 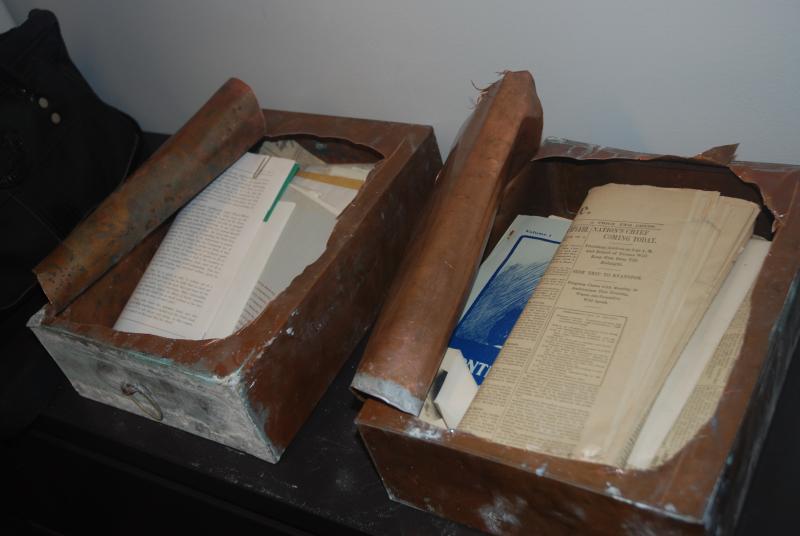 A story in a 1958 alumni magazine listed the contents, so we knew what we would find inside. We did not know what condition it would be in, and were pleasantly surprised to find everything nearly damage-free. 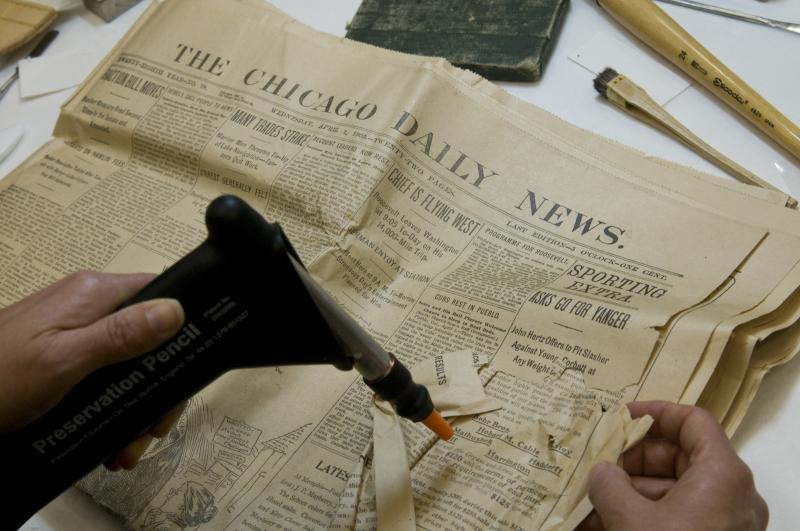 The 1903 box contained many newspapers, now 106 years old, showing the activities surrounding the laying of the cornerstone of the Law School's first long-term home, Stuart Hall. President Teddy Roosevelt attended the event, so it was on the front page of most papers. The papers had varying degrees of damage, and Ann worked to flatten and repair the newspapers. 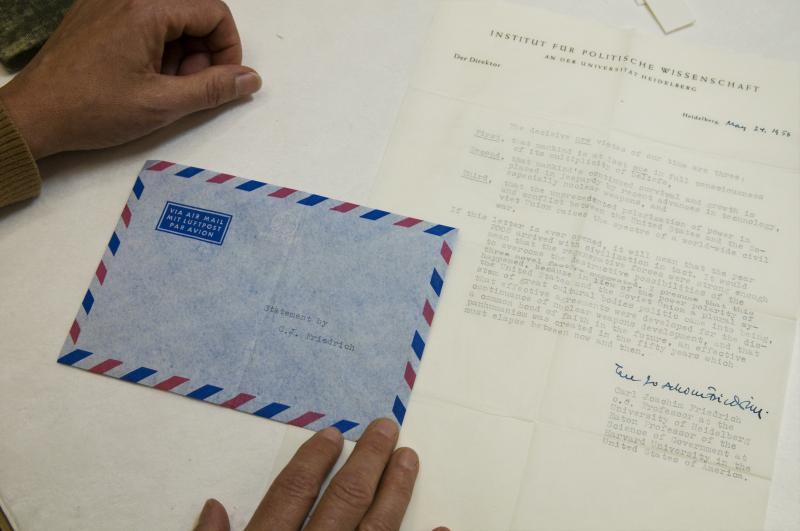 The restored letter from Professor CJ Friedrich, dated May 24, 1958. 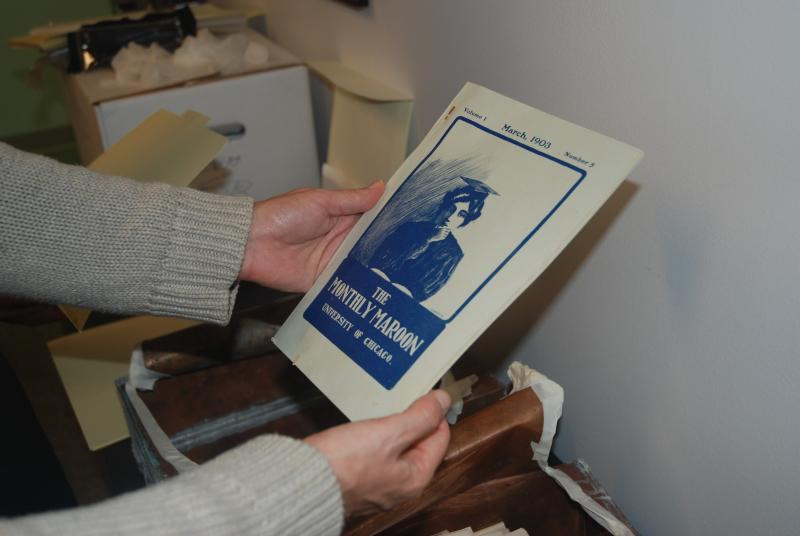 Among the items in the 1903 box was this issue of the Monthly Maroon. Every item was carefully cataloged and stored and will be added to the University of Chicago Library in the Special Collections department. 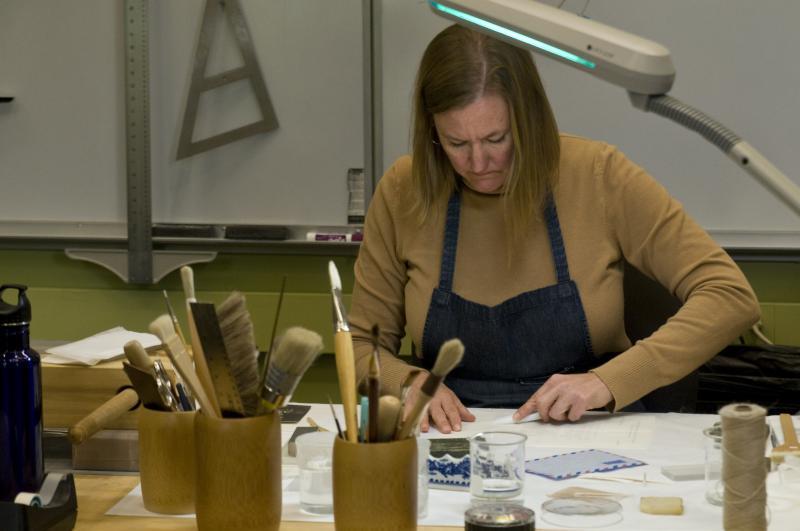 Ann Lindsey, the University Library's head of conservation, helped us access and preserve the materials in the boxes. Many folded papers and sealed letters needed careful opening. 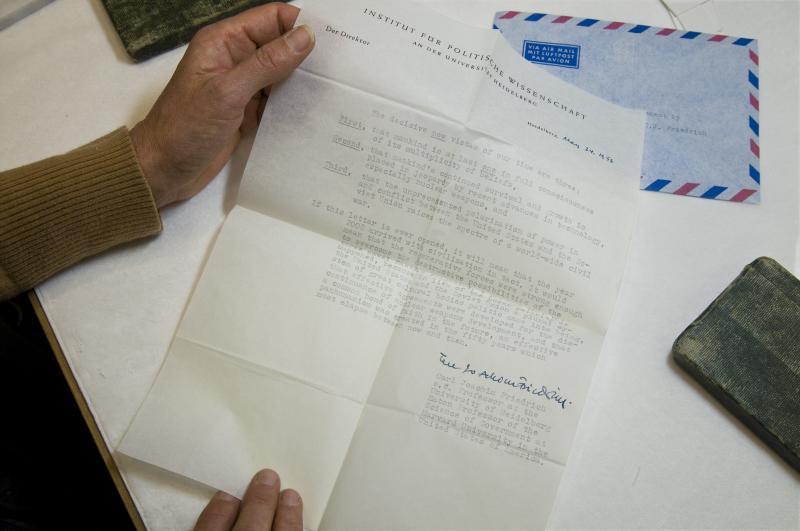 This letter came from Carl Joachim Friedrich, Professor at the University of Heidelberg. Despite being printed on thin onionskin, the letter was in perfect condition. 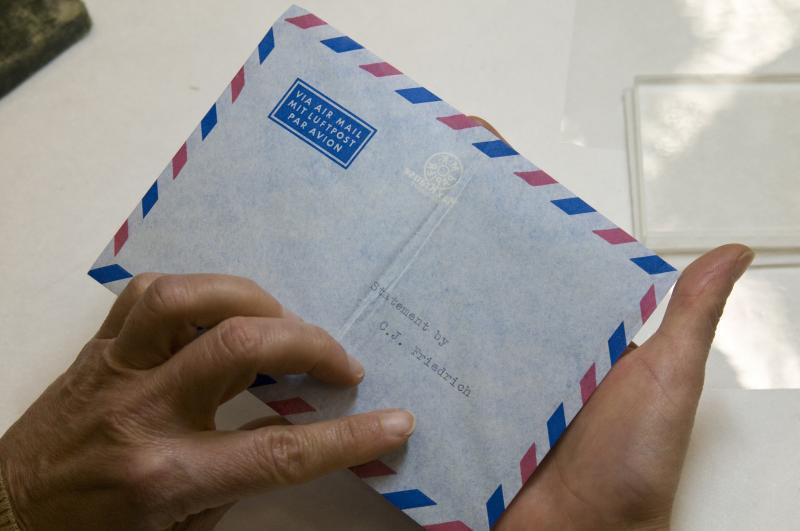 For the 1958 cornerstone, Dean Edward Levi asked luminaries of the time to draft letters telling people 50 years hence what we should know about 1958. The letters were placed in the cornerstone sealed without having been read, and were opened for the first time by our conservation department. The letters came from, among others, five Supreme Court justices, two major newspaper publishers, and several academics. 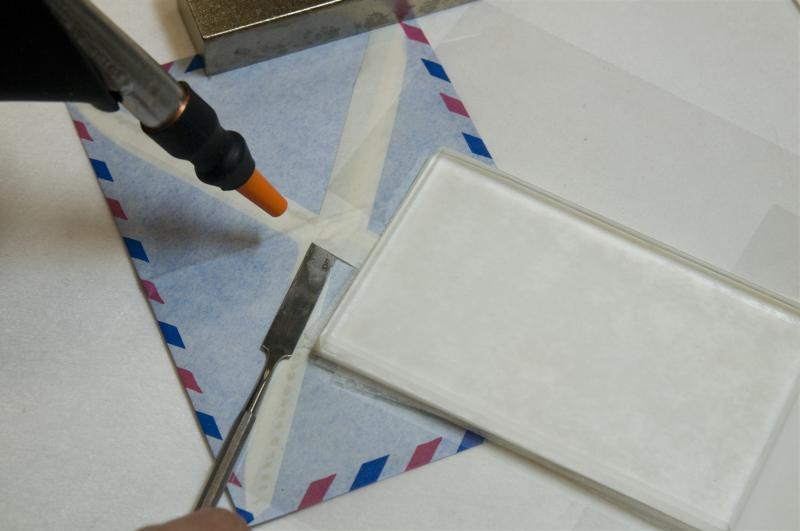 Ann Lindsey used a water vapor gun to gently release the seal on each envelope, damaging neither the envelope nor its contents. 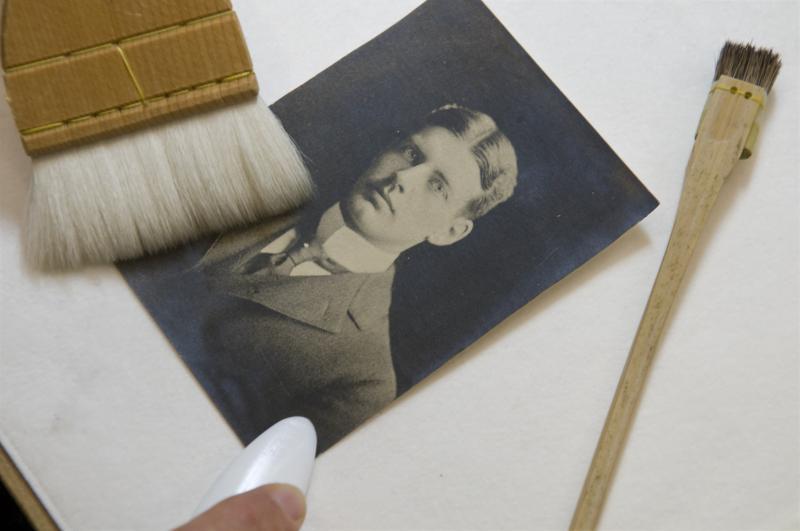 Several photographs were found in the 1903 box.This is James Parker Hall, one of the first faculty members of the Law School. All but one of the photos (which was folded over at one corner) were in perfect condition. They will be scanned and the originals archived in the University Library. 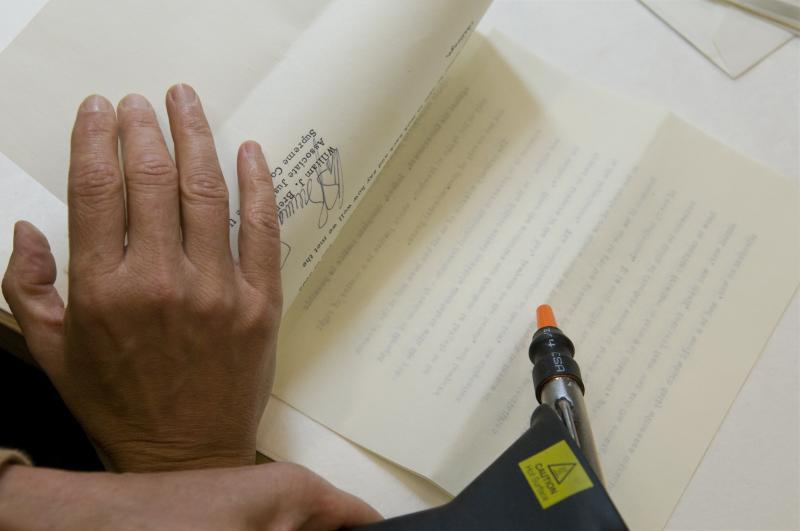 Ann Lindsey worked on all the other letters as well. This one is from Justice William J. Brennan of the Supreme Court. 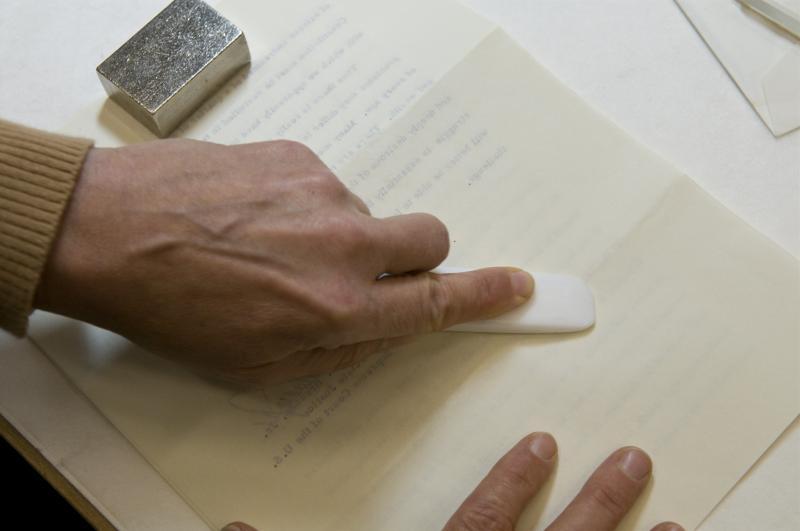 Several of the letters are on display at the Law School, together with other materials found in the cornerstone, and some will be reproduced in the next issue of the alumni magazine.

Photographs of the Law School's 1903 & 1958 Time Capsule excavation. Browse through the items in the cornerstone at the Library's Time Capsule exhibit.